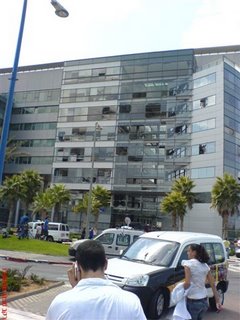 Saturday afternoon we had a delicious nap in Jeru. I think my sub-conscious absorbed news of the cease fire and allowed me to rest more deeply than I have in a while. It would have been nice to get in one more museum but sleeping was also a good way to spend our time.

We said goodbye to our wonderful host and took the new toll road (kvish 6) back to Haifa to save time and avoid traffic. I was on the road only once before, after Yom Kippur a few years ago. It was dark and Jeremie and I decided it was too scary since it went right next to the territories and in those days there were lots of shootings. When we realized we were on it, we got off it somehow.
This time though it was worthwhile. And interesting. We passed some portions of the famous separation wall. Good fences make good neighbors, I say.

Coming home this time was easier. Koshka was fatter than ever but very happy. She seems to be taking the war in stride, better than many pets. (I heard today that some 500 dogs in the north died of heart attacks.)
The apartment was also in much better shape than when we left it last: the fridge was clean, we knew that within five minutes of opening windows and turning on fans the air would be good, and the home improvements we made last Saturday were welcoming. (I just added a cute pic of Adi installing a smoke detector to that post.)

We watched a couple episodes of our current favorite TV show, the BBC series "Coupling" before going to sleep. We both slept poorly. I had bad dreams , so did Adi and we both found ourselves awake around 4:30 AM. I guess again our sub-consiences knew it would be a tough day.

Tough, but beautiful. I woke again around 6:00 and saw a colorful sunrise on Mt. Carmel. It was one of those sunny days where the Mr. Roger's theme song, "It's a beautiful day in the neighborhood!" played around my head. I made pancakes and eggs for breakfast and enjoyed a cup of my own espresso, the way I like it. We dressed and packed an overnight bag for Adi's parents' house. (It is getting so easy now, our toiletries are all ready, I keep Cholent's medical file with me at all times in my work bag with my laptop.) Adi put the finishing touches on his speech and I hung out the laundry to dry.

We drove quickly to the cemetery and got there right on time. Right on time for a siren too. Apparently there'd been one a moment before that we hadn't heard on the road (just as well). Most of us huddled under the corrugated roof of the simple structure at the cemetery entrance. We were told that we would not be able to make speeches at the grave, in keeping with the guidelines of pikud haoref which say you shouldn't have a gathering of too many people outside in one place.

It was a pretty good turn out considering it was only close family and a few colleagues who had seen the death announcement in the paper. The hazan started the service near the buildng then we drove up the hill a bit and the sons-in-law and grandsons lifted the stretcher with the corpse to the grave site.
The body was tied in a simple shroud (a white sheet). On the walk over the shroud was covered with a velvet covering like the ones that shield the aron hakodesh in synagogue. The cover was removed, and the carriers lifted the body by the shroud and placed it in the waiting grave. Several buckets of rocky earth waited by the side of the grave. After appropriate prayers were said, concrete slabs were laid on the body and then the gransons emptied the buckets into the grave. We laid flowers on top.

Below us the Med sea shone a gorgeous blue. Above us the minarets from the Ahmedim mosque of Kababir pointed to the sky (the Ahemedim are, as I understand it, to Islam like what Reform Jews are to Judaism). Several sirens blasted during the service and I inched a little closer to the mountain side. Then they subsided and the rav encouraged us to return. After a brief debate, Adi decided to go ahead and read the brief words he'd prepared.

He spoke of a kind and giving grandmother who enjoyed life. He spoke of his excitement when this year he discovered that even through the cloud of Alzheimer's he could communicate with Gila in her native German. He had never heard her speak it before. It turns out she shared Adi's love of the German Jewish poet Heinrich Heine and Adi chose an appropriate quote of his, something about how you should enjoy every pleasure in life for life ends.

It was a perfect quote for Gila, apparantly.

With more hesitation, Adi's mother Nava read her piece too. She spoke of the fact that so many young people are being buried now, but Gila completed a full natural life. Despite a life filled with loss she was able to transmit joy to her family.
-----
On our way to Adi's parents' house for the shiva Adi and I swung by my office building for a look. The area where my group sits (on the 5th floor, facing West) is mostly intact. But the north-west corner and the northern wall are pretty much shattered. Luckily the attack came on a Friday (not a working day) and no one was injured. Also, the safe rooms where we've been working proved to be safe. But I wouldn't have wanted to be getting a coffee (near the glass windows on the north side) when it happened!

They've already managed to board up most of the windows with cardboard.

There are two big scorch marks on the incline between the parking lot I use and the coastal highway ramp above. Also amazing that no cars were hit either on the road or the parking lot and that the highway wasn't damaged.
-----
At the house we looked at family albums, ate, and talked. It was quiet (no sirens). I noted how much Adi looks like his great uncle did around his age, and how much he looks like his freckled, smiling grandmother did as a little girl. "If I'm one quarter Schrieber, then Cholent will be one eighth Schreiber," Adi noted.

In the afternoon I napped. While I slept there were many sirens in other parts of Haifa and several rockets. Adi woke me just before a siren here, followed by three loud booms. The window shook, but here we are several floors down, in a room with internal walls. We will sleep here tonight and I'll work here tomorrow.

Tomorrow at 5:00 PM Cholent has an important super-sonic ultrasound. We will see if Cholent is sporting boy or girl parts. More than that I'm just curious to see him or her since it's been more than a month since our last ultrasound. I read last night in the wonderful book "Great Expectations" that at this stage Cholent is basically a mini-baby. Parts are all in place and from now to delivery Cholent's main task is to put on weight.