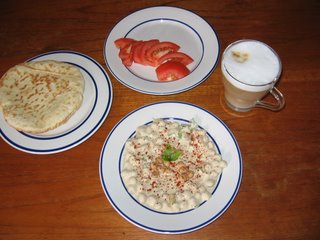 This was the easiest and perhaps the best of my recent recipes. You basically take a can of chickpeas, drain it, and mix it with some fresh garlic, parsley, lemon juice and raw tahina. Oh yea, and some red pepper flakes. That makes it rock.
Oddly, I'd never really gotten behind the whole raw tahina thing. Raw tahina (or "tahini" if you pronounce it like that) comes in a plastic jar. It resembles natural peanut butter in that it's very hard to stir and the paste gets separated from the oil. One advantage of the raw tahini is you can opt for the "whole sesame tahina" which I guess is healthier, like the whole wheat version. Except for tahina. It's probably cheaper too, and it keeps in your fridge basically forever. All you need to do then to "make" tahina is add water, lemon juice, and garlic if you like (I like).
With this Chumus (or humus if you like that spelling), the chick peas stay whole, so it's chunky style. We had it for breakfast, the traditional time to have humus.

Faye has a recipe for "French pastry dough". I made some, thinking it would be a good base for a tart to use up a surplus of plums. Her recipe was for a rasberry tart, I think. Well, the dough seemed a)kind of boring and b)a lot of work for something so boring. So I surfed the web for inspiration and maybe something more appropriate for my plums.
Epicurious had this great Plum Tart with Marzipan Crumble. I didn't have marzipan but I had almonds and a mini-chopper. It was good inspiration. The plums didn't come out soft enough but my improvised crumble was bakery class quality.

I never really liked blinzes. My bubbe, grandma's mother, used to make them and they were considered a real special treat. Only, I never thought so and felt kind of guilty for not appreciating the sort of sweet, yet sort of cheesy things that I understood were special, her specialty.
So I wasn't so excited to make them, but there they were in the book. With some unusual sounding filling options: cabbage or mushroom and cream. More savory side blinzes. OK.
Like most things involving cabbage, the quantity produced was large. The recipe included some sauteed onions and a hard-boiled egg. The pancake part of the blinz came out light and fluffy. Too much so for my taste actually. I longed for the "flappers" my mother used to make when Jake and I were kids which were prepared much the same way (in the blender) but were thicker, denser, tastier.
I wasn't crazy about the cabbage stuffed blinz and because making them was very very bowl and pan intensive (= massive clean up effort), I don't think I'll be making them any time soon. But Adi was quite pleased with them and gobbled up all the leftovers within a day or two.
Still I was impressed. Like so many Eastern European recipes, these blinzes took simple, inexpensive ingredients and transformed them into something hearty, satisfying, and a little surprising.
Posted by Zehava at 5:21 AM