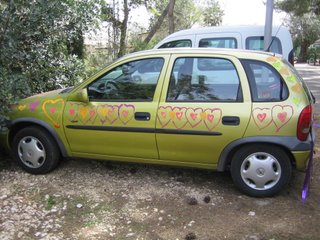 I'm feeling WAY more relaxed and confident these days about the birth. Much of the confidence comes from understanding some numbers. Here are a few helpful facts I've learned recently:

Having neglected my Faye Levy project for a while, I made her baked version of shakshuka, a North African egg dish. Alas, delicious but Cholent-resistant tomatoes were a key ingredient and I experienced quite the violent puking a good couple hours after enjoying my lunch. Oh well.

Sleep is poor again. For a while I was making it through the night with as few as one pp wake-up breaks and an early rise. Now I'm back to more like 3 trips up before a pre-dawn awakening. Oh well, I see lots of pretty sunrises.
This week I bought a new humidifier, thinking it might help. If you don't know, one of the many, many wierd side effects of pregnancy they don't advertise is the way your body produces more mucus to help protect you from disease... and stuff up your nose with an alergy like congestion.
I was very excited about sleeping the first night with humidifier. I was a little hungry when I went to bed, but too tired to eat. Mistake! Going to sleep hungry is a sure-fire recipe for nightmares.
Well the first part of the dream was fine. I was at a party at the shul. My friend Larry was there, he was playing with small baby Cholent. He then passed her to Richard Dryfus (slightly younger version than current Richard Dryfus). He was lying on his back on the floor and held Cholent to his chest and lifted her in the air. She was happy, with dark hair, still a small baby.
Flash to part two of dream. Now Cholent was a little older, with brown-blonde curls, light eyes, and a happy smile. We had two cars. One, our current beauty, the Disco Corsa (featured here decked out for our wedding). The other, a 70's red compact with the word JEEP inconguously printed across the back in big, guidish black letters. Cholent was in a car seat in the back of this later vehicle which for some reason I had to leave in the middle of the road for a few minutes (with her in it) while I manoeuvered Disco Corsa in front of it. I parked Disco Corsa and turned to the back seat to get something out of the back seat when an intruder opened the back door and reached his hand in. He was saying "Hey, baby".
My thought: "I must defend Cholent!" Car keys in hand, I planned to stab the intruder's hand with the sharp point of my keys but first emitted a scream. It came out out loud, for real, waking Adi.
"What? what?" he said, somewhat in his sleep.
"Nothing, bad dream," I said. Why Cholent was in the other car I don't know.
But the two cars is probably because earlier that day I helped my brother-in-law jump start his car which was conveniently stranded across the street from our apartment.
What Richard Dryfus was doing in my subconscious I do not know.
Posted by Zehava at 10:42 AM

Meanwhile, I am only worried from the posted photo that the wedding decorations on Miss D. Corsa remained permanently! Please, say it washed away...