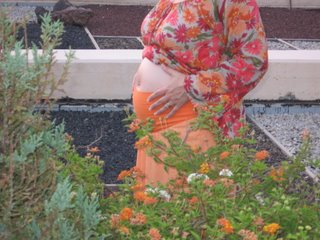 I got through my day at MegaCorp in a conference room with three other refugees. Some of them had been for three weeks already. One cracked jokes, another had lunch with me. So it was OK. Some work stresses came up during the day, only tangintially related to the war so I'll leave out the details but suffice it to say that I finished the day feeling pretty haggard despite the nice air conditioning. The lack of splendid snacks at the Jeru campus was also a bummer. They make you PAY for yogurts here! What chutzpa!

I enjoyed observing other subtle differences between the holy city's campus and my home site. The women's bathroom on the third floor had a two-handled laver for ritual hand-washing. It also had free tampons. The non-applicator kind, as though proving how tough Israeli women are. The gumball machine had a prominent sticker marked KOSHER. Many heads were covered: scarves and hats of varying lenghts and colors for women, kippot of every shade, perched at every angle for men.
But the generic chairs, cubicals, and free coffee were comfortingly familiar.

A colleague who has been working at another site told me that as sirens were being heard where he lives (south of Haifa), he and his wife had been discussing taking their kids to the States for a while. We talked about the work implications. In essence, we can do our work anywhere. All we need is an internet connection and a telephone. Many of the content experts we consult with (all the people I work with) are not even in the same time zone. In fact, if I were to sit in New York, they'd be closer.
But the local managment has been understandably working hard to save face vis a vis our US mega bosses. Otherwise MegaCorp would invest in places that are not under fire. It is not clear if our actual boss (who sits in California) would or could approve a temporary "work from home (in the USA)" situation for us. I could probably play the pregnancy/heatlh card if I have to. In fact, that is the main reason I'd consider relocating.

------------
After managing to get out a little early (6:30 PM), I found my way to the Jeru suburb where Adi's parents were staying with friends. Friends with a pool, I'd been told. The pool turned out to be a strange little triangle fit in the corner of a concrete yard. They had a fish pond too and many cats.
------------------NESHAMA------------------------------
The concert was in Beit Govrin, a good 40 minute shlep south of Jeru. On the ride we heard the news. Somehow I find the radio news even more stressful than the TV news, perhaps because I must strain harder to understand it.
I thought about wheather going to the States for a while would make sense for us. There would be a huge price to pay psychologically and emotionally. I started writing about it here and decided I'm not ready to share that stuff, I'm afraid it would hurt too many people I love who might not understand. Suffice it to say that it would NOT be easy for me to come and if we can work out a way to stay longer in Jerusalem, I'll be very relieved to do so.
I must also say that Adi, being a native-born Israeli (sabar) does not have the same baggage that I do. But I think he has not fully weighed how painful it would be for him to sit in the US worrrying about his family and friends here every minute.
We will have to make a decision together, with the best interests of Cholent in mind. Cholent has alreday made it clear that he or she likes Jerusalem ;-).
Various pieces of the news intruded my personal thoughts, pushing them this way and that. On one end is the very real and very scary possibility of a serious escallaiton of crap. If it gets too bad, leaving won't be an option because the airport would close (no flights out if no flights in). On the other end is the voice of some minister saying "This is a fight for our existence." If that's true (and I believe it is), then leaving= abandoning, giving up on the Zionist experiment, and kissing goodbye the land I love.

So my mood when we got to the concert wasn't great. I was hungry too.
But things brightened when we got out of the car and smelled what Adi's mother called "kibbutz air!", example: cow shit. Ahh! To me it is a comforting smell.

There was a lovely surprise too: fabulous food! For 30 NIS we bought plates piled high with many different healthy, vegetarian salads. Not your usual fairground fare. But this was no ordinary concert.

Neshama Carlebach is the daughter and musical heir apparant to Reb Shlomo Carlebach of blessed memory. He was a real presence, a modern-day hassidic leader who wrote 5,000 songs, practiced the love he preached, and brought joy to the lives of many. A religious Jew and a hippie, many people found inspiration at Reb Shlomo's concerts and in his presence.

The concert was held in an ancient Roman amphitheater, delightfully fitted with modern seating and nice lighting. It was Tu b'av, the Jewish festival of LOVE. Being a lunar thing, the full moon shone gloriously in the open sky.

It was a women's concert and accordingly drew a largely female crowd. The audience was mixed in terms of age and religiousity, but there was a preponderence of women in long flowy skirts, modest shirts, and colorful scarves wrapped around their pretty young heads. Many of the women were pregant, I noted with pleasure.

Before the headliner, a series of five different female vocalists appeared on stage. Yemenite Etti Ankary appeared in a long orange outfit. Yasmin Levy tickled the air with ululating hazzanistic tones. Hadara ? blew us away with rocking screams of "LORD, make me HIGH!" that seemed to shoot from her pink and blue hair strands. Leah Shabbat looked like she'd been grabbed from her kitchen and sounded like she smoked too much, but still exhibited a rare natural talent and depth. Mika Carni teased on the violin, standing squarely in distressed jeans. And Ruti ? was just wow (The MC introduced her as having a "black voice"?? and a white something else. That made me twist my face to Adi in a huh?) Soul. That's what her voice was. A voice that made me turn back to Adi and say, "Who says that Jew's ain't got soul, my brotha?". Pure gospel glory flowed from her.

And the content, I forgot to mention: all Shlomo-inspired, G-d glorifying, beautiful stuff. Many of the tunes were familiar, and almost all of the lyrics struck a happy chord in memory for they all flowed from the prayer book.

And then: Neshama appeared. I was expecting someone older. But she was no older than me. And she was BURSTING PREGNANT! Her glorious big big belly bounced under an Indian print dress, lifting it above her knees. She reminded me of a happier Janis Joplin.
Her name, Neshama, litterally means soul. She was all soul. She gave her soul, big time. She talked lovingly about her father:
"If you knew my father, you remember how he would have hugged you. And then kissed you. And then he would have said: 'SHABBAT SHALOM! GUT SHABBES!'
And it could have been a Tuesday or a Wednesday. Because to him, Every day was shabbat!" The audience laughed. I gave Adi a thumb + forefinger to my mouth + inhale symbol and he laughed. Right on.

She sang solo, she sang duets with the other women, lovingly. When Etti Ankary came back, she urged us to keep singing a niggun amongst ourselves while she told us a story:
"When the children of Israel fought the battle of Jericho, they did so by circling the walls of the city," (I turned to Adi: like I did to you at our wedding!)
"And while they circled the city, they SANG. And the enemy inside said, 'uh-oh. we ain't got a chance, because this people, they are SINGING'. So c'mon everybody, and SING!!!"

We sang. Neshama called for the love of this concert to reach right up to heaven and stop the war. Before the show there were thanks to the organizers for carrying on with the show despite it all, and for offering free tickets to refugees like us. This of course made me cry.

Finally Neshama urged, "OK, everyone! For my father, come DANCE!" Women came forward. I joined them, grabbing hands in a circle. Old and young we smiled at each other and rocked out, moving and singing and shouting. Tears streamed down my face. I thought about my sisters and felt them dancing with me. You know who you are! Especially you who would have rushed up there with me from the beginning! A. and R. and S. and L. and J. to name a few. Just us girls. It felt so good to have "girl time" especially now, while I'm cut off from my girlfriends and when this stupid war is bringing out the most macho parts of men.

Am Yisrael Chai!
Posted by Zehava at 2:05 AM

this posting made me cry. Am Israel Chai.

we should talk about what it is like watching the war from here. waiting the 24plus hours for the release of names. very hard....we feel very cut off. and the news is just as bad here.

we miss you. stay safe and do whatever is best for your growing family.

Sorry, I have no compunction about this: leave, if you can. It doesn't have to be forever, and it doesn't mean you love Israel less. It means you love your life and you put your family first. Smart people leave when other people are trying to kill them. Einstein left. And anyway, you are no good to Israel dead. Alive, you can do something, even from abroad.

I would love to dance with you!!