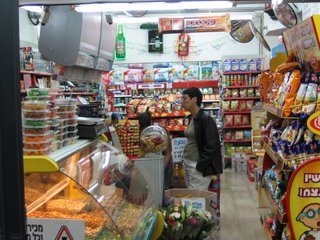 So I don't usually get too excited about potato chips. But last night I was overcome by a craving for them so powerful I nearly cried. Adi, my prince and savoir, went to Fooksy's to buy me some.
(---> Photo of Fooksy's. The chips are in a line with that person's head)

"But I'm not going all that way for a pitzkele little bag!" he insisted.
"No, no. Better get the big one. No, better get two big bags, just in case. And a bottle of Sprite or Fanta," I told him.

He came back with two bags of Tapuchips (elite's incarnation of Frito Lays), a small bottle of Sprite and one Fanta. Smart boy was covering all bases.
"I got you 'classic' and 'extra crunch'." He announced as I danced for joy for several minutes.
"I didn't even know there was such a think as 'extra crunch'. But I think I want it!" I opened the noisy red bag and found what we call Ruffles back in the old country. Excellent.

I happily settled down for the next installment of "I, Claudius" (a good one, they finally kill Caligula) and ate the entire bag slowly but without pausing. I sipped bits of the Fanta.
It's not as bad as it sounds. One "big" Israeli bag is about the size of an American "big grab" bag intended for one mortal.

I was so completely happy.
Posted by Zehava at 11:04 AM